The Domaine de Déva is part of a vast protected natural area, including both the dry forest (in the heart of the Domaine de Déva), the seagrass beds along the Poé beach and part of the West Coastal Zone, around the reefs of Gouaro-Déva, which has been listed since 2008 as UNESCO World Heritage Site.

> The dry forest: the green jewel of Deva 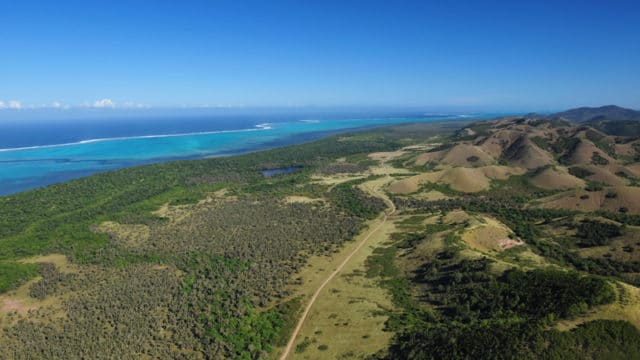 The dry forest of Gouaro, which occupies the coastal fringe and some interior hills, is the largest in New Caledonia and of an inestimable ecological value.

The term “dry forest” refers to forest complexes that develop in a dry climate (less than 1,100 mm of rainfall per year). Regarded in the world as being one of the most biologically interesting ecosystems, it is also, unfortunately, one of those that is threatened by complete extinction within a few years.

Located mainly on the west coast of New Caledonia, up to 300 or 400 m above sea level, these forest complexes are subjected to drying trade winds and to the dry season for six months of the year. Although the dry forest originally covered about 4500 km² of the territory, it now only occupies 2% of its original surface.

In New Caledonia, the dry forest is home to nearly 450 plant species, 60% of which are endemic. It also serves as a refuge for important fauna consisting of insects, molluscs, reptiles and birds. Some of the species it housed have already disappeared due to urbanisation, livestock, agriculture, bush fires and the introduction of invasive species.

The dry forest of the Domaine de Deva estate in figures:

Conservation of the dry forest in Deva

The New Caledonia Natural Areas Conservatory (NAC), South Province (owner of the site) and SEM Mwe Ara (site administrator) have made the choice to pool their resources in order to spearhead an action plan to make Deva a major site for the protection and restoration of the dry forests of New Caledonia: 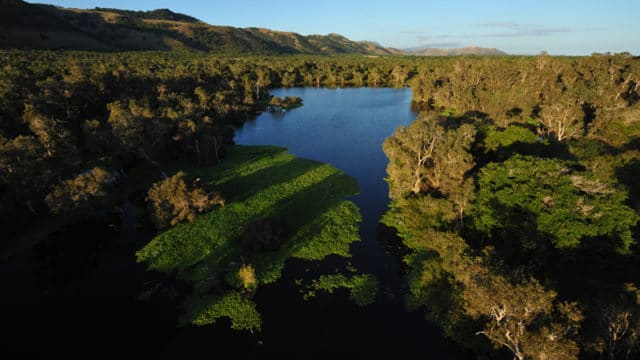 Thus in 2016, a “defence” barrier was created by the CEN in Deva to protect 300 ha of dry forest and 100 ha dedicated to active restoration (plantation).

In the dry forest of Deva you will be able to admire some rare and endangered endemic species such as the imposing Droopy (Acropogon bullatus) with its characteristic drooping leaves. You will also be able to find the discreet but nevertheless sublime Diospyros minimifolia with its thousands of small waxed leaves.

On the other hand, if you come across a tree with a trunk stained with tar, admire it but do not touch it. This is the Goudronier (Semecarpus atra), an endemic tree which is highly allergenic.

Among the most majestic trees, you will find the Raporé (Mimusops elengi) and its cousin the grey oak (Planchonella cinerea), both of which are easy to recognise with their deep barks and their imposing sizes.

> Listed as the world heritage of humanity!

Certain areas of New Caledonia’s lagoon and reefs have been listed as World Heritage Sites since 2008.

UNESCO voted on 7 July 2008 to integrate a part of the New Caledonia lagoon into the World Heritage of Humanity. It is 41,000 hectares spread over six major sites divided into 14 marine areas, or about 1% of the total lagoon area.

On March 20, 2009, the South Province adopted its environmental code, which is now a readable and modern environmental regulation focused on the protection of ecosystems and endangered species, as well as a sustainable development action plan detailing nine strategic axes. The marine biodiversity of the archipelago is exceptional with 9,372 species identified. We are in a real sanctuary
In Poé, the West Coast Management Board has been active since 2008.

The beaches along the Deva estate are populated by a very important ecosystem: the seagrass beds. Consisting of marine plants called phanerogams, they serve as habitat for many species that use it as food, refuge and nesting grounds.

These flowering plants grow under water and spread their roots in the sand. Algae, on the other hand, do not bloom and cling to the ground. Often referred to as the “lungs of the sea”, seagrass beds are also home to green turtles that graze on these underwater meadows.

>> Gouaro-Deva and the « big » animal species 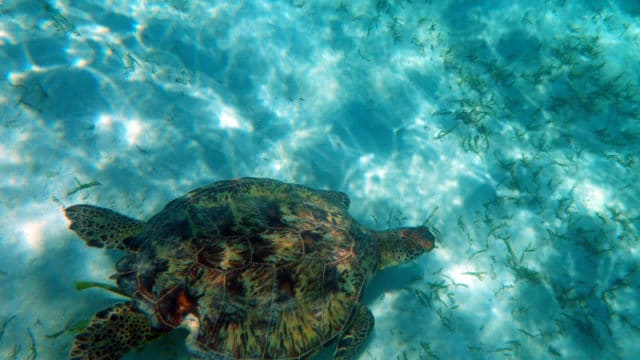 The most important nesting site for “big head” turtles Caretta caretta is located on the coast of Bourail (the beach “Roche Percée”). This Caledonian population represents between 10 and 20% of the total population in the Pacific.

Nearly 150 nests are dug each year by turtles. Controls on post-emergence nests have shown that at least 70% of eggs laid gave birth to a young turtle likely to reach the ocean, which is a very satisfactory rate.

It is also exclusively in the rocks of the turtle bay that live some specimens of the lobster of Bourail Panulirus homarus. It’s a small population. It’s a rock lobster with wide distribution in the Pacific but living in a very restricted habitat in New Caledonia. All West Coast passes are also important habitats for the dugong since repeated aggregations were observed over several days.

This protected area is located on the public maritime domain of the southern province and on the marine domain of the communes of Bourail, Moindou and La Foa. The marine area is limited to the coast by the leash of the highest waters, to the open sea by the 100 m isobath after the barrier reef, to the north by the pass of Cape Goulvain and to the south by the Isié pass.

The northern and southern limits of the West Coastal Zone have particularly well developed mangroves. Bourail Bay, located centrally, is characterized by a wide opening in the barrier reef allowing waves to crash directly on one of the few rocky facies of the New Caledonian coastline. This area includes four marine protected areas that are characterized by various outstanding sites including: the Poé fault, which is a very narrow bleeding in the reef and the lagoon north of the Bay of Bourail. With an average depth of about 20 m, this ancient river bed is a small canyon with violent currents and frequented by many large sharks and pelagic species,

Gouaro Deva includes a mangrove with beautiful stands of Heritiera littoralis and Excoecaria agallocha along a small narrow estuary intersecting a set of coastlines. A mangrove formation of 27 hectares, in very good state of conservation, is located at the mouth of Déva and Temrock. Plant species are common to those in the Pacific area but their role as an important refuge for birdlife makes it a site of great ecological value.

The reefs consist mainly of barrier reefs located a short distance from the coast from which they are separated by coarse sands of small size and very sparsely populated by fish. The fringing and intermediate reefs are poorly developed, the former being mostly in turbid waters. The exchanges between the different reefs are facilitated by the shallow depth and the existence of scattered coral pates which serve as relays of colonization.

This reef, 1,600 km long, second after the Great Barrier Reef, delimits a 23,400 km2 lagoon with an average depth of 25 to 40 meters. The reefs are on average 30 kilometers from the coast, with a maximum of 200 kilometers to the Entrecasteaux reefs. Overall, coral reefs are in good condition because of low human pressure.

The reef complex is unique in the world in that it is “freestanding” in the ocean and encircles the island of New Caledonia offering a variety of diverse forms of oceanic exposure, including warm currents and cold currents. The number of species is estimated at over 1200 sponges and corals, 2500 fish, 6500 molluscs, 4000 crustaceans and 3 types of turtles. Among the most endangered species are dugongs, whales and sea turtles.